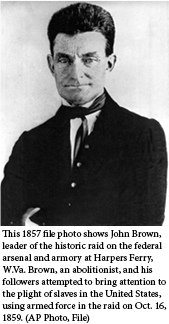 On 5 May of this year, the Vermont legislature adopted a concurrent resolution “designating October 16, 2017 as John Brown Day in Vermont.” To commemorate the day, the Woodstock Social Justice Initiative is hosting a Brown celebration and anti-racism event in Woodstock, Vermont on the October 14th aimed at empowering community members with the understanding and tools needed to take action against racism. Several renowned experts on Brown, abolitionism and anti-abolitionism in Vermont and New Hampshire will be presenting, as will local educators who will demonstrate how they teach about Brown and other controversial figures.

Continuing education credits will be available.

Sometimes a casesheet would lay out details of the arrest of a union activist and his children who were with him at a rally.  Sometimes Amnesty was asking for letters to a government official who, with the stroke of a pen, could ensure the release of a medical rights pediatrician in Pakistan who was being threatened along with her family members, for speaking out at demonstrations about the United Nations’ Universal Declaration of Human Rights article defining basic medical care as a basic human right.

I shared the AIKids’ Urgent Action with my UA colleagues in London and AI United Kingdom almost immediately began its own effort at youth letter-writing, The Junior Urgent Action.  Shortly, AICanada’s Urgent Action Program Director Marilyn McKim began the LifeSaver geared for students from 4th to ninth grades.  Every year, another AI Section either began using the AIKids’ UAs or the youth casesheets from Canada or the United Kingdom, and throughout Central and Latin America AI Sections began using the Spanish language casesheets produced by a Spanish language teacher in Colorado, Maya Meis.

There has always been debate, in education in general and among Amnesty International human rights educators about when and if to introduce students to human rights issues and especially to human rights abuses worldwide.  As I reviewed copies of children’s letter sent to me over many decades from teachers, parents, scout leaders, and young students themselves, I became convinced that in many, even most, instances young letter writers were profoundly empowered by advocacy letter-writing because “doing something” about human rights appears to have empowered the young writers to “Speak truth to power.”

Hundreds of letters written by children using the AIKids’ Urgent Action casesheets are now part of the AIUSA Archives at Columbia University’s Center for Human Rights Documentation and Research which preserves the papers of a dozen human rights organizations and many dozen individual human rights activists worldwide but especially from the United States.

Though AIUSA no longer produces the monthly AIKids’ Urgent Actions, it is of huge comfort to me that both AI Canada and AI United Kingdom continue their monthly letter-writing programs for students with all this implies about students learning that they need not passively learn of human rights abuses daily on the web and on television or in film but they too can take action to speak out to persons in authority urging a halt to unacceptable government collusion in internationally-condemned behaviors against minorities, women, the elderly, children, ethnic groups and refugees.

As part of the international AI Write for Rights December Celebration of the UDHR, there will be and has always been, a case specially written for young letter-writers.  This casesheet is not only for young writers, but new English speakers, persons in literacy classes, families who want to write together to honor the December 10, 1948 Universal Declaration of Human Rights.

Celebrate the UDHR in your home or your classroom, your school or church by letter-writing with a youngster.  Better to light a candle, than curse the darkness; “Write a letter, change a life.”

More than 70 years ago, three cases were heard before the Supreme Court of the United States, challenging the forced removal and incarceration of Japanese Americans.  The Supreme Court majority ruled against the three plaintiffs, Gordon Hirabayashi, Minoru Yasui, and Fred Korematsu,  essentially “rubber-stamping” the military’s bald assertion that the mass round-up was reasonable and necessary. In doing so, the Court abdicated its critical role in safeguarding fundamental freedoms guaranteed by our Constitution.

The children of Gordon Hirabayashi, Minoru Yasui, and Fred Korematsu filed an amicus brief on September 18th in the U.S. Supreme Court opposing Executive Order No. 13780, the Trump administration’s travel ban on nationals from six Muslim-majority nations, pointing to the unjust incarceration of Japanese Americans during WWII as an urgent warning against presidential powers run amok.

Human Rights Educators USA is joining the nationwide campaign to #StopRepeatingHistory. We encourage you to add your name to this call to action.

>> Learn more and join the campaign

Thousands of people are planning to take action on May 1st to show communities united against hate and bias and ready to stand up to ensure there are resources and opportunities for all students. Join the efforts and stand in solidarity to make sure that schools are welcoming and supportive of immigrant students and their families.

“In this political climate we see increased absenteeism and anxiety in our immigrant students. There is an out and out fear of what may happen to them. It breaks your heart to see students and parents have difficulties separating in the morning. As you can imagine, students who have to remember to carry the names of adults they should contact if their parents are caught in an ICE raid have difficulty remembering classroom lessons,” explained Trish Gorman, President of the Oakland Education Association (OEA)

Source: Educators, students and community leaders rally to Build Schools, Not Walls on May 1

Become a Member
We are grateful for the generous support of our members, individual donors, and The Puffin Foundation Ltd