While disturbing incidents of hate and bias in schools are regularly reported in the news media, the incidents are just a fraction of what educators are encountering in classrooms across the country, a new study by the Southern Poverty Law Center’s Teaching Tolerance project finds. 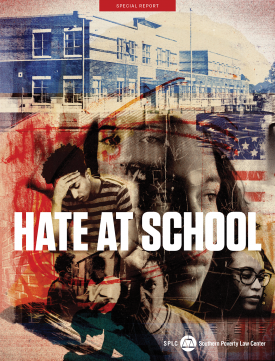 The report, Hate at School, compares 2018 news reports to a survey of more than 2,700 K-12 educators conducted by Teaching Tolerance that asked them to describe incidents involving hate symbols or the targeting of others on the basis of race, ethnicity, religion, immigration status, gender or sexual identity.

“The teacher reports confirmed our suspicions that there are far more hate and bias incidents than make the news and that the responses by school leaders vary considerably,” said Teaching Tolerance Director Maureen Costello. “It’s up to school leaders and members of our communities to ensure that students are not only safe from harm but have the opportunity to learn in an environment that’s inclusive and free of bias.”

Teaching Tolerance found 821 school-based hate incidents in the media in all of 2018, but teachers reported 3,265 such incidents in the fall 2018 semester alone. Fewer than 5 percent of the incidents witnessed by educators were reported in the news media.

Hate at School analyzes comments from survey respondents to gauge the types of hate incidents occurring in schools, where they happen, who is most often the target of these incidents, and how schools are responding.

The most common hate and bias incidents were based on race or ethnicity. These incidents made up 33 percent of those reported by educators and 63 percent of those reported in the news media. They typically involved racial slurs, primarily the n-word, along with a dozen accounts involving blackface and a handful involving nooses. The study also found that these incidents were more likely to result in disciplinary action and a denunciation of the act by school leaders.

Of the incidents reported by educators, those involving racism and antisemitism, which made up 11 percent of the educator reports, were most likely to be reported in the news media. Anti-immigrant and anti-LGBTQ incidents were the least likely to make the news.

Most of the hate and bias incidents witnessed by educators were not addressed by school staff. No one was disciplined in 57 percent of them. And nine times out of 10, administrators failed to denounce the bias or reaffirm school values, the study found.

In 2016, Teaching Tolerance brought public attention to the school climate crisis in two reports, The Trump Effect and After Election Day: The Trump Effect. Based on surveys of thousands of educators during the campaign and immediately after the election, the reports revealed a wave of political and identity-based harassment in schools, where students across the nation were emboldened to bully and target classmates.

FBI hate crime data – widely acknowledged as underreported – shows that in 2017 hate crimes in K–12 schools and colleges increased by about 25 percent over the previous year, outpacing the national increase of 17 percent.

To help combat the rise of hate in schools, Teaching Tolerance offers Responding to Hate and Bias at School – a manual that guides educators through crisis-management and post-crisis efforts and offers research-based strategies for reducing bullying and creating a welcoming school climate. It is available to schools and educators across the country at no cost.

The Southern Poverty Law Center, based in Alabama with offices in Mississippi, Florida, Georgia, and Louisiana, is a nonprofit civil rights organization dedicated to fighting hate and bigotry, and to seeking justice for the most vulnerable members of society. For more information, see www.splcenter.org.

Become a Member
We are grateful for the generous support of our members, individual donors, and The Puffin Foundation Ltd
Loading Comments...