Over the last few months, HRE USA has been focusing on immigration and the detention of children at the United States – Mexico border. In February, a representative from HRE USA joined the action coordinated by the US Human Rights Network to deliver 80,000 petition signatures to the Office of the United Nations High Commissioner for Human Rights, calling upon the United Nations to launch an “investigation into US violations of the human rights of asylum seekers.” At the beginning of this month, HRE USA continued this work, through an event organized by HRE USA Regional Representative, Michelle Chouinard, entitled, “Immigration, Detention, & Resistance Through Art.” 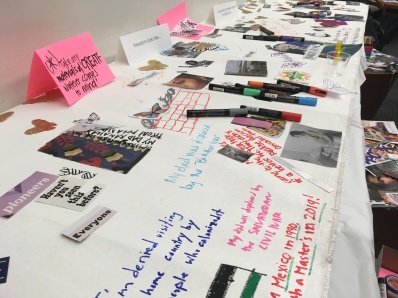 HRE USA held the event on Wednesday, May 1, 2019, in collaboration with Art and Resistance Through Education (ARTE), the Human Rights and Humanitarian Policy Concentration at SIPA at Columbia University, and the Human Rights Working Group.  It was a  lively night of art creation and human rights advocacy. The walls of the room were lined by work curated by Pastor Isaac Scott, an artist and the program director of The Confined Arts and Columbia University Justice-in-Education Scholar. As individuals reflected upon the themes of justice and narrative, guests were encouraged to contribute to a collaborative collage. Participants used moving imagery and text to create messages of resistance and solidarity.

The night was completed with a panel discussion which highlighted the voices of a passionate group of human rights activists, artists, and academics. Through moderation by Khalil A. Cumberbatch, the chief strategist of New Yorkers United for Justice, they welcomed the audience into their conversation of justice, creating a universal call for social change.

Surrounded by art, the panelists highlighted the connection between art and activism. Ximena Ospina, trans activist and founder of the undocumented student group at Columbia University, pinpointed that art is about disruption. She passionately spoke for art that promotes a version of storytelling that is owned and amplified by the teller. This art is individualistic and active, radiating into the world unapologetically. Simultaneously, she claimed art as a demand for justice, rather than a humble request to be seen.

Angy Rivera, co-executive director at New York State Youth Leadership Council, praised art that exists on the margins. Rivera emphasized that art does not need to yearn for the acceptance of the mainstream in order to thrive. She identified that assimilation into whiteness is both unnecessary and counterproductive. After her community of undocumented artists struggled to find spaces that would accept their voices, they vowed to create their own spaces. With strength of purpose and a great commitment to justice, Rivera fosters art that is unconstrained and liberated, one that welcomes the authentic stories of individuals.

Tsion Gurmu, the legal director of the Black Alliance for Just Immigration and the founder and director of the Queer Black immigrant project encompasses the journey towards justice through her work. She calls for solutions that are based on a transnational approach to migration. She reaches into the foundation of this issue in order to unearth the root issue of forced migration. Gurmu desires an international transformation in the laws and policies that force individuals to flee their homes in the first place. The United States should not simply be a responder to crisis, but rather an active and solution-seeking partner for those outside of the country.

Professor Geraldine Downey, the director of the Columbia University Center for Justice, strives to use her work to intertwine art and criminal justice. She is actively working to bring Columbia into prisons in order to serve incarcerated communities. Through the lens of art, she believes people can discover all that they are capable of. She was moved by one woman who found her vocation in creating coloring books. After making them for her own child, she spread her creativity to other children. It is stories such as this one which resonant perpetually, capturing the humanity of those who are incarcerated.

Pastor Isaac Scott tirelessly works to unearth the dehumanization of human beings who are incarcerated. Through the significance of linguistics, it is difficult to find a single positive word that has the same power as a negative word. Names serve as powerful identifiers, just as signs in a space to communicate rules and facts to people. In this way, language can be warped into a tool for incarceration. Through his research at Columbia University, Scott discovered that words such as “prisoner” and “criminal” have quantitatively negative impacts on those who they refer to. They are knives that cut into the humanity of individuals, leaving them wounded and scarred. They create an unjust association with being innately and entirely flawed. As Scott keenly described, these words do not give identity to anyone.

Together, the panelists called for the re-humanizing of language in order to revitalize humanity and in order to shift our perspectives towards the needs of the marginalized, while embracing their voices in their entirety. Oral history, especially when it is intertwined with the visual arts, allows for choice and agency. By deeply understanding the complexity of storytelling, we may better understand those who share their narratives.

HRE USA was able to continue to take action on immigration beyond the event by co-signing onto a public comment submitted to the United States Commission on Civil Rights regarding immigration detention centers and treatment of immigrants. The public comment can be viewed here.

Become a Member
We are grateful for the generous support of our members, individual donors, and The Puffin Foundation Ltd
Loading Comments...