As part of HRE-USA’s commitment to defending DACA and advocating for a Clean Dream Act, we will be interviewing a series of Immigrant Rights activists and sharing ways that educators can support the #HeretoStay movement.

“There is Power in Numbers” – An Immigrant Rights Activist’s Journey 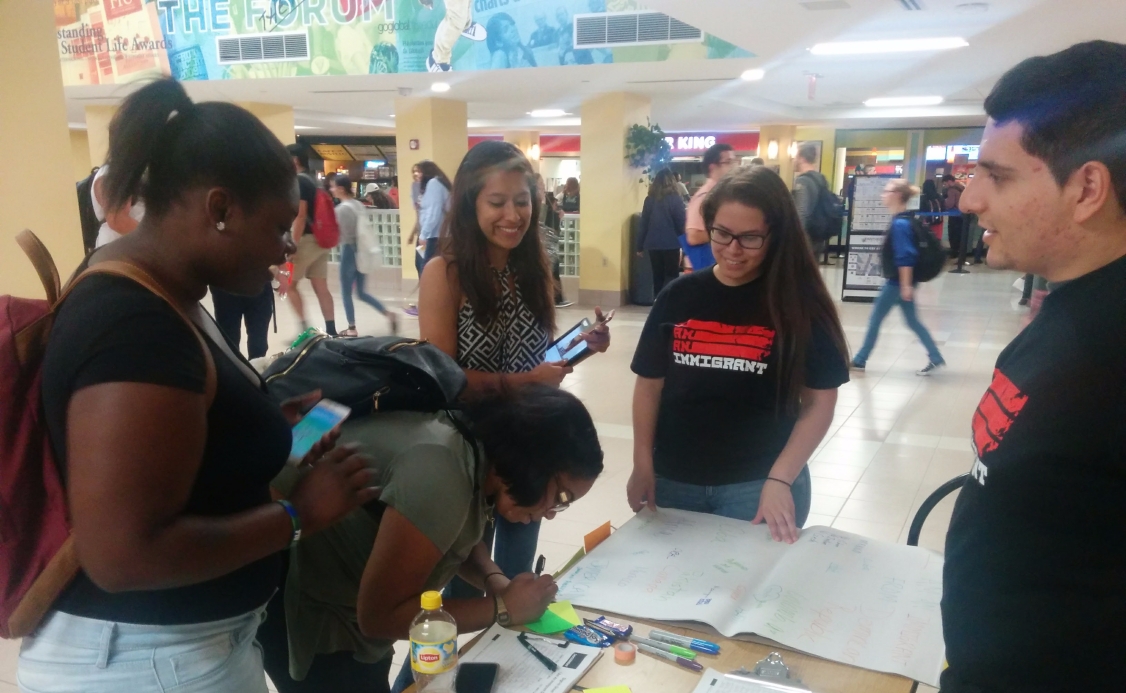 Dulce (above center) an immigrant rights activist and college student currently based out of Washington, D.C., remotely working with an organization called Students Working for Equal Rights (SWER) and also United We Dream. While her dedication to the #HeretoStay movement is clear-cut and straightforward, her personal journey has taken her across thousands of miles, across the border of two countries and through three different U.S. states.

Dulce was born in the Mexican state of Guerrero, in the southern region of Mexico. Given that her family found it poverty-ridden and infested with crime at the time, her parents decided to leave her community in search of better opportunities in the United States. She crossed the border exactly on her ninth birthday, which she considers her “birthday gift.”

The arduous journey with her grandmother, aunt, mother, and other family members spanned across three days and three nights. Dulce shares that during that journey into the United States, her mother unfortunately was caught by U.S. border agents, forcing her mother to attempt the journey four other times, one of which where she was kidnapped.

Dulce herself ended up living in South Carolina and started third grade there where she learned English and eventually successfully completed middle and high school. As her high school graduation date loomed ahead, she realized that she wanted to go to college. However, this proved difficult, given that South Carolina did not pride itself in welcoming immigrant communities and was known for its anti-immigration legislation, essentially banning immigrant students from attending college.

When DACA came out, Dulce was still in high school and had applied and been accepted into three different universities. Despite this being an incredible accomplishment, for Dulce it was a huge let down, as all of these schools did not offer financial aid / in-state tuition for individuals with her immigration status. Eventually, Dulce was forced to give up on her dream of going to college for a whole year.

During that year, Dulce found a job, attempting to save as much money as possible in order to achieve her dream of eventually going to college. She attempted everything to achieve her goal of getting her higher education paid for, including going to a military recruitment office. At the time, she found it to be her only solution, yet she found that nothing came out of it, and given her immigration status, she wasn’t able to join the military either. While Dulce struggled to make something out of her life, she found that all of the doors of opportunity were closed to her.

Moving forward, through internet research, Dulce eventually found a scholarship over Facebook for DACA recipients through TheDream.US Even though it was a week before the deadline, she applied and by December, she learned she received the educational scholarship. Ever persistent, learning that only students who were eligible for in-state tuition could receive the scholarship, Dulce moved to Florida not knowing anyone, with her dreams in her suitcase, to attempt to receive an out-of-state tuition waiver.

Having moved to Florida, Dulce soon learned that she was ineligible for in-state tuition waiver, having needed to spend three years of high school in the state, but stayed there for two years. She cobbled together her savings from the year and a half that she had worked, got a job on campus, but the scholarship she received only covered one-third of her tuition. Given that she had to still pay for her housing, it got to a point where she couldn’t afford college.

Despite all of the setbacks, Dulce refused to give up and eventually moved once again to Washington, D.C., where she currently attends Trinity Washington University, where with the support of TheDream.US, she is able to complete her education and she finds a community that is welcoming of immigrants and DACA recipients.

In Washington, D.C., she continues her activism, as she understands how important it is to speak out and fight not only for yourself, but for other people as well. Before she became involved in activism, she herself didn’t know the origins of DACA and realized it was a program made possible by activists that came before her, who paved the path for people like herself. In turn, Dulce hopes to pave the path for others who will come after her.

For this reason, alongside SWER, she also works with the immigrant rights organization, United We Dream and connected with them immediately when she arrived to D.C. to be as much help as possible. As of November 2017, she has been helping to organize the walk-out at Trinity Washington University, in support of the passing of Clean Dream Act.

For Dulce this work is important because she feels her community, and other communities (for instance the Nicaraguan, Honduran, and Haitian communities in the Temporary Protection Status program) are under attack under the current administration. Furthermore, future immigrant communities will be affected, as the administration seeks to terminate programs that will directly impact immigrants. For this reason, Dulce lobbies and calls her senators and representatives, and aggressively advocates for them to pass the Clean Dream Act, legislation that she will provide protection for herself, her community, and also her mother, whom she considers the original DREAMer.

Through her multiple journeys and dream to pursue a college education, Dulce remains hopeful and feels that she receives a lot of support from allies and strangers who support this cause. Recently, students at Trinity Washington University organized information sessions, where many non-DACA recipients came out to show their support of immigrant communities and to learn more about how how the DACA and TPS repeals were negatively affecting the immigrant community.

Alongside her activism, she continues to study at Trinity Washington University, as she is double-majoring in Communications and International Relations. While her future career is still uncertain, she has a desire to possibly involve herself with immigration law, work for a non-profit, or get into politics. She has a deep desire to make a positive change in her community. Even on her free time, she is very active on social media, following and arguing with politicians, and reading through Facebook posts of individuals with different ideological points of view, including those that might be hateful. In spite of much of the ignorant rhetoric online, she believes that while some people may never change their mind, she believes that you can at least change their attitudes. Even on her downtime, Dulce can be found online, explaining the basics of U.S. immigration and debunking the misinformation around immigrants and crime to strangers. 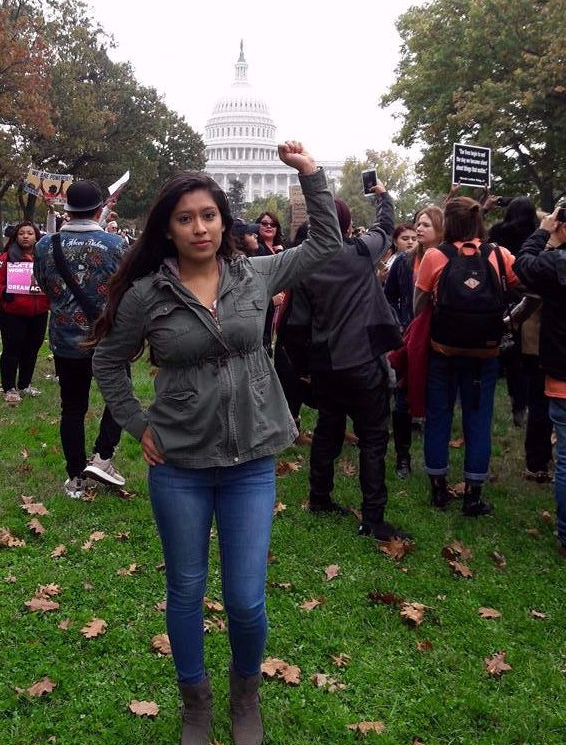 Action Steps: Click here to take a look at some resources educators and their communities can do to support the Clean Dream Act. Also check out this toolkit created by United We Dream to use in the classroom.

HRE USA is a project of the Center for Transformative Action